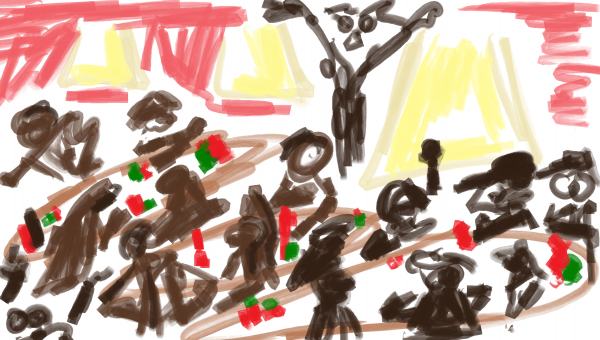 The Village was the Other Casino – an entirely different entity. No Late Nite Tony, no Harvey Bumpback. Really, none of those guys who worked hard at poker, who treated it like the sales job they just left an hour before. Instead, the Village was exciting, packed, manic and most of all, rich. A full personality but with an opposing set of demands. Nested in the marvelous, snow capped Tobaggans, only a winding drive along the main pass to the empty, plaintive, and agricultural half of the state, the Village served a poker population utterly in apposition to Matton’s chatty and tricky opponents. It was East Coat versus West Coast, hyped up versus laid back, skill versus action.

There were two key ingredients that created the amazing brew of action and absurdity. The first was her proximity to the East Side of Seaport, home of Infovisor and the shamelessly flush tech sector. While you might not think of coders and nerds and project managers as gamblers, the software industry imports large numbers of their employees from all over the world, particularly Europe and India. These two cultures, especially the latter, foster gambling and a unpuritanical way of looking at life once in the great seemingly secular union. Since the majority of these tech immigrants are men, and because Seaport is slightly numerically skewed to women, the math tells the truth: legions of them need something to do with their time.

The Village is a lone gambler’s Siren.

The second reason, one much more frustrating to poker purist Sylvester but just fine with novice destroyer Sylvester, is the sad state of management of at the Village, with its roots deep in the foundations of the faux-cabin blueprint. The Uduanni tribe borrowed heavily to create the rain making card joint, but still ran out of money, not just before a hotel could be added (disaster) but even before the brick and mortar of the casino itself was done.  They had to overborrow, and trapped themselves into a gross arrangement where they still aren’t even making money nearly a decade later.

It becomes stranger. This same crack management team seems to have set up the poker room as well. Instead of a low stakes entry cash game and a mid stakes game for the real players, they decided to have the best of both worlds. They spread their lowest game as $2/$5 blinds (meaning the base bet which the game revolved around), likely the only casino in the country to offer this as the entry point. Then, as if compensate, they created a restricted buy in of $300, reasoning that the traditional, family friendly $1/$2 and $1/3 players would be put at ease.

Poker insanity they wrought. As any experienced player or wiser gambling expert could have told them, they corrupted the game into something else. The combination of wealthy, lost adult men who had no idea how to play poker and the frustration of the ridiculous cap created a lost island tribe of card culture, an Australia whose evolution went unreplicated anywhere else.

In other words, the Village was the stone cold (crazy) nuts.

Sylvester and Matton, then, didn’t go to the Village to play poker exactly. It was more of a table game against the other players, a sort of bingo for men. They (really meaning everyone) brought a bunch of money, expecting to somehow have more when the night was over.

Nothing was beyond these players. Play tight, hang on. Enjoy the ride.

Sylvester Mallis Jones was the Village addict of the two. He loved and hated this game. He loved it for the embarrassing quality of play. He was great at math and in the long run, really couldn’t lose at such a silly place. However, as we know, Sylvester was not interested in the long run. When he lost, it was catastrophic. He raged and howled. He threw cards and berated his dumbfounded opponents who were only trying to repeat what they saw everyone else do. When he broke the hinge on the poker room door after some standard beat, the dealers started calling him Bruce Banner.

Matton, on the other hand, was weary of the Village. He recognized the low hanging fruit but his theories on poker were largely wasted here. He knew everyone would realize the value of their cards. They didn’t want fold, and he recognized that they had no incentive to. Most of the players were making at least one hundred grand a year from their careers with no family to support, yet the casino would only allow them to put pocket change in play. So, they called you down for curiosity. They did nothing by the book. They turned middle pair into a bluff for grins.

For hand to mouth Matton, it was a place of mixed blessings. Worse, he just didn’t feel destined to win as Sylvester did.

The Village was a date, and Sylvester had the confidence and the fury to make a date work. Not even very deep in his heart, Matton wanted to skip the dating scene. But there was no avoiding it – not today when his buddy called him for action and for advice.

The two came up the back way to the room a staircase at the back of the slender parking structure (remember, out of money). Security was lax, not that these two had anything in mind, but everyone avoids the TSA if they can. Friday night, it was an uproar.

Waiting in the room, it’s no surprise: the lines are insane. They’re twenty away from getting into a seat. Glass surrounds the room – it’s as close to a figurative fishbowl as humanly possible. A thin man in a bad black suit seems to conduct the affairs – Stanley the wayward floorman. Matton tries to catch his eye, this many who knows everything that matters about the Village (and why his time is short there), but on this evening, even friendly faces get no time.

Matton points out a player in the game they’ve played with in a small, private game. Sylvester, still scanning for targets, doesn’t pay attention quite yet. He doesn’t like home games, and that suits Matton fine. Sylvester is always trouble in them. He tries to listen to headphones, which you can hear the Metallica at full blast. Matton isn’t the host but his inner sense of responsibility is tripped and he is extremely embarrassed.

The two consult. Matton is somewhat relieved; maybe they will go elsewhere. Sylvester is impatient and torn. He can’t sit still but is beside himself.

“Look! It’s Calling Smurf, Sugar Dave and Crazy Mike, all at one table! This could be the best night ever!”