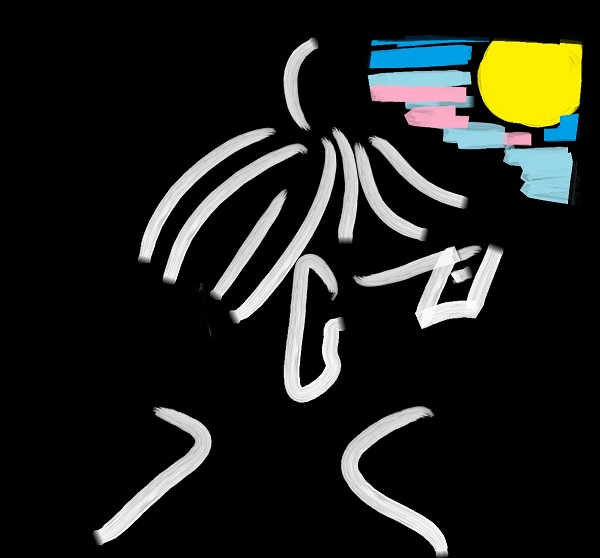 Not long ago, Matton Header had begun composing a list. He wasn’t sure why, at first, and in fact, he wasn’t sure how to even do it. He hadn’t used pen and paper for a while, especially after his computer had suffered a massive stroke while he tried downloading the client from a Hungarian online poker site.

Second, it was early in the morning, with the sun out. He was wearing the sweatsuit, XXL, that was his pair of greasy pajamas. Unshaven, ruddy with aggravated pores, brown hairs everywhere, bleary. He might as well have a been emerging from hibernation or from a magical super-metabolic state that made even his personal diet somewhat sensical. A giant shit, in other words, was on its way. (He had read sleep burns a surprising number of calories – hope never dies.)

From beyond, distraction: cars, children, a yipping dog, a late garbage can being clanked about. In other words, no cards, no games, no focus to distract him. He found himself front of one of those quasi-cardboard focus-huts they sell as desks in catalogs and in world class mass crap distribution outlets, and then turned over the back of an opened envelope.

Movie at the Cineplex

Drinks at Chino’s with Sylvester.

Muffin and coffee at Starbucks.

Wednesday (This was a frugal day, instituted after a trainwreck session at the Morgue.)

Caesar salad at casino. (He liked the croutons.)

Matton had paused there after underling the word. He could see where it was going right away: we all know what we are doing, even in our blackest moments, because our survival self comes up for air from our insanity, for one good breath.

Our conscience likes to check in. Oh, we’re doing that this year? Just listen to me for a second before I dash off.

In other words, we’re all, even in our darkest hours, still responsible for ourselves.

The thing with Matton’s list (it could have gone on like this and you’d be more worried, as you should be, about his health, you scoundrels), it was indeed inspired by one of those rare moments (prompted by an embarrassing loss) of conscience, but it wasn’t really that pure.

This list was the ode of a shaken man to the precipice before him. He had been losing, after all, and what other measurement does a lost poker player, a boy at heart, have?

It’s wasn’t really much of a crisis, it turned out. Matton would go on to win, crippling Harvey Bumpback, trips over trips (some players just can’t let go of jack-five – guess who?). Perhaps that very pot would inspire the slow-roll. Harvery was sharp as a tack, after all, and once spotted an ex-dealer deftly swiping chips from a pot. He’s not going forget or forgive our portly hero.

So Matton ignored that list. It never went past that cigarette pack on Wednesday night. Frankly… it’s in a waste bin right this moment.

But what’s the real story? Why did he do this?

The thing is, that list wasn’t complete. That’s the problem…  because… it was was useless.

And Matton knew it.

That foolish list was missing something… something big. This list was the one with all the great qualities you tell your interviewer you bring to the job. This is the list of accomplishments you intend this year. The shopping for that vegan fresh start, the one where you are going to drink green, roughagy smoothies for every meal.

This was the accounting Bernie Madoff sent to the regulators.

You see, Matton had a problem, and he didn’t want to write what happened evening (or Thursday, for that matter.)

Or lonely on Saturday. Blackjack with the cute single mom dealer at the Village.. +120. (Huzzah.)

Would it have done any good for Matton to see these numbers, written indisputably with his own shaky print?

Maybe. You can’t put a price on escapism, the true rake on life.

However, at least for now, the real answer is No.

Because Matton has an alternative plan, one he thinks is perfect for him. It does involves his computer. In fact, this task is scratched upon on a far more useful pad of paper the one that keeps him alive if miserable – the one in his mind. He would enter: Fix Computer.

Problem gambling, in other words, can wait.

As Matton stared at the empty list, his cell rang. Sylvester. Relief, relief from a moment of conscience.

“Hey Matt. I need some financial advice. Let me pick you up.”

Sylvester Jones had gruff, clipped voice. An northeast coast voice. A little bit of smartass if not just plain ass built right in. You could imagine him oiling his hair or stetching on some beaters while making this call.

“Sure.” All personality, Matton Header.

Matton breathed, his giant body shuddering and making his chair squeak. What could be better than to escape your problems by giving advice on the very subject tormenting you?  To someone you admired? Matton squeezed into a coat, preparing to by picked up by Sylvester Jones, super villain of the Seaport poker scene.

Matton kept the cell in his hand to scroll through some Tweets. Bill Perkins is freerolling some asshat fat doofus he likes. Doug Polk is making fun of Matt Berkey. Now Matton smiled – he didn’t belong here, he knew where he belonged, what sun was his. A dog barked. Despite the bright sky and easy temperature of Seaport, Matton waited inside. He scavenged for a mozzarella stick in the refrigerator.

After all, Sylvester Jones was never on time, and for a good reason, it would turn out.

Matton held his breath, then called the computer repair store. His great plan, the one that would save him from all this, children, cars, dogs, and garbage cans – was a vision that exceeded all the lists and even the respite Sylvester, tough man of the world, was offering.