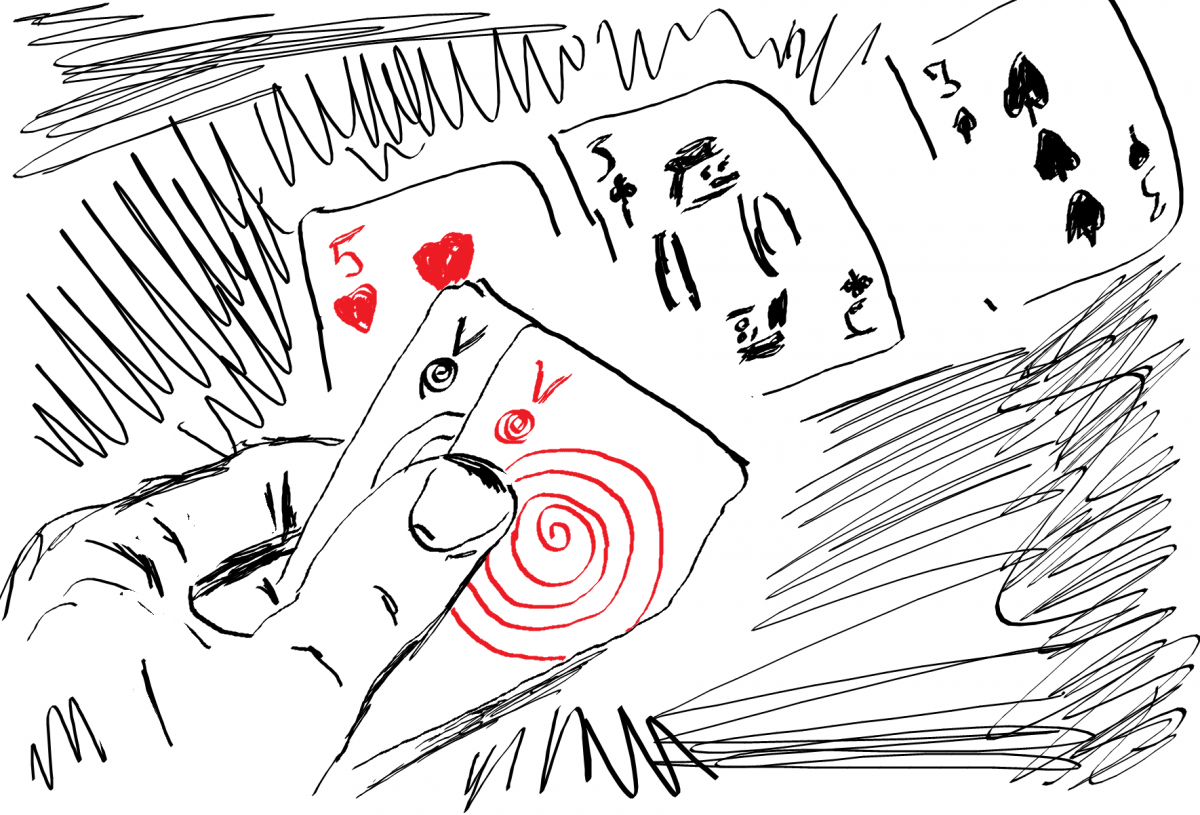 Isolating, never mind opening, like cbetting, is overrated these days. No one folds. Everyone loves you splashing it in there, trying to define your hand, hoping something good will happen.

They call 12x opens, they flat behind with aces. As poker knowledge grows and the pernicious influence of the Poker Educators waxes, trickery becomes commonplace.

Everyone’s a flytrap: sticky. The mantras of the past are dead.

Better wake up. Here in 2/5 land, where the rubber meets the road for a realistic and sustainable income, where 5/10 and beyond is nearer than you think – just a mental trick away, really – dangerous ideas have taken hold amid the debris.

This is no way to enjoy my evening off from ten hours of poker reporting.

It’s been an education on every front, and a good one. Pacing and racing between my assignments, grabbing coffees at the market place or crashing the employee lounge for a ten minute meal, the working life has rejuvenated the middle of days. It’s been a long time since I wanted to do something someone has paid me to do.

It’s what I left that world for, after all.

I’ve also been watching the casino clients in the slots. These are different people from back home, though they take up the same void as pastime. They work harder out here, I can’t help but feel, in a gloomier land under the wind and dark spell of the Atlantic, and deserve their personal obfuscation more.

We earn our vices.

On the west coast, I now see, the slot machines are less virtuous, less earned. Everything, even this unrepentant lifesuckage opportunity, has its own relative worth.

Break time. It’s some one else’s high school experience. I grab a tray, pile some food, and find a corner of the employee lounge to be alone. I enjoy endless overbaked salmon and complacent Fox News coverage of the post-election pathos.

All the cups are that plastic Styrofoam or the plastic itself. Now, there is a kitchen washing all the plates and flatware, so we fill the ground with this stuff (no one on the East Coast participates in the half-sham of recycling) out of pure indifference.

Whatever much we earn, how much void do we deserve?

The Signature Room is my primary work space. It’s more than the average conference space tournament overflow often gets dumped into. In fact, this is a big part of the nature of the Borgata: I am in a very nice casino hotel, surely the best on this coast and comparable to all but the most absurd in Vegas and the gambling world beyond.

The Signature Room holds most flights and series tournaments, up to three different ones at a time. It’s here where I learn about the excitement and drain of the poker tournament experience, from as close an objective perch as is possible.

I am overwhelmed, at first, by the sea of faces clustered around the tables. They are often packed in, microscopic life, feeding at the natural debris of the poker economy, the mothering dead turned over, nutritive and moribund.

They say that the piranhas don’t eat each other, but this is another myth about poker – and in particular the tournament scene.

I can see all the scars they have left on each other. These are weary, tired bunch, full of long faces readying themselves for a long day. That is, if they are lucky.

As for me, I am lucky to be here, doing this compelling work, live poker coverage. From these simple, tough circumstances, all these hungry, tested players create great moments of our game. I quickly begin to like all the players.

However, it turns out there is only so much time, and the challenge of getting a story, photographing it, writing it, formatting it to both editorial standards and software parameters is taxing. I can get about two good posts and one filler in each hour.

By the end of a day, I’m exhausted but hyped with adrenaline – just like at the end of a poker session. I need to calm down, but I’m in a tough personal spot.

My body’s toleration for alcohol has maxed out. My liver is dying, my skin peeling from its abuse as it rejects its job of processing the toxin and sends the poison back into my system. The cigarettes are literally, not figuratively, killing me.

Here on this beautiful Resort, a true island of luxury in the remaining debris of AC, with nowhere to go, no time on the walls, and the sun unseen, I turn to poker to relax from poker.

I examine this isolation from a grim, thin Chinese man. He’s hard and tough and prematurely greyed. He stinks a little. He wears a cheap hat. His face contains contempt so worn in it is a characteristic.

His snap isolation to 4x reeks a bit, too. His frequencies, even after one orbit together, don’t make any sense. His sizing is lazy and aimless. His attitude screams arrogance.

While the action unfolds – a great word for this situation, as he picks up several callers including the original under the gun player – I weigh my options and visualize his holdings.

Once I settle on the king-jack tier, it’s my turn to act.

I count out 140. It’s the right play with [ah][4h]. I have a shitty, overrated hand that is best rewarded by seeing a multiway pot where I can overflush someone. I’m getting the right price for this street. However, with my effective stack capped at 500 thanks to the tiered Borgata structure, my stack to pot ratio will be abysmal. I’ll always have to fight to the felt on my most likely best flop, and my hand will look like what it is if indeed the two hearts arrive.

We can settle this now, not later.

There is no way he can do anything with his mediocre holding, I decide. I push out the raise and wait.

For nearly a year and a half, I have been waiting for the new normal, but it never arrives. There has been no baseline, no new mood. There is no impulse. I knew to go back to her because she returned to me in dreams. I was compelled to action, summoned by God and conscience and interior purpose.

This is what Proust wrote, and it was just and true.

So I made it happen – and unhappen.

I thought our instincts were supposed to save us. But what if, like some sort of emotional auto-immune disorder, they only attack what they are supposed to protect?

What becomes the right thing to do?

My Chinese antagonist has some strange ideas in his head, too. He breathes and snorts, his contempt, already on the surface, now spews out of his widening pores.

He puts in the 500 for the fourbet shove, and it folds back to me.

I don’t like the queen high board, but it’s the ten that apparently does it.

Mr. Contempt announces his pair and tables [kx][10x]. While I double-check the runout, the table whispers about ace-king, telling themselves a story of what happened. My antagonist gathers in the pot with wide, crab-like scoops, giving off that slight half-snort, half sigh of some peculiar relief – one of the most curious, never mentioned behaviors in poker, one I have often thought to write about – that you often hear after someone makes a questionable decision and is rewarded.

In a clockless room, the night melts away without measurement.

Sooner than we expect, another tournament will begin.

The Void and the Man, Part II

2 thoughts on “The Void and the Man, Part I”