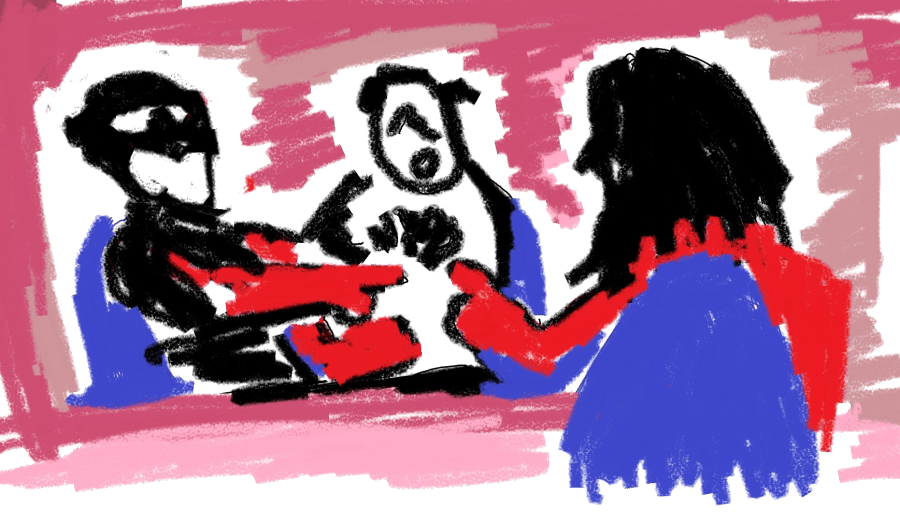 “You know, I could have sets there.’

Yes, it’s one of those tables…

…but on speed. We’re going to be talking “strategy” all night.

“I can have some draws too,” Neat Beard continues, unasked.

Oh really, there are other hands than the one you had?

Still, Neat Beard is the nicer one. He’s just softer. He’s dark haired like his opponent but doe-eyed and pale. They both wear athletic clothes, but Neat Beard uses them for comfort. Messy Beard looks like he gets outdoors – maybe he lives in California, but via New Jersey – he’s got that Slavic/Italian east coast dipshit smirk. He gives the crap, not takes it.

It spreads quickly. “I would have called the first raise, but didn’t like the three bet size.”

Messy is also broader and tanned. Same color hair, same color eyes, though. If they are indeed brothers, Neat is the older, more responsible one, the one the parents leaned and learned on so Messy could mess around.

“I missed a bet there, that card was good for me.”

Neat is formal, he can hold a job and looks like he has one. Maybe there’s a wife or a domineering girlfriend in the spa. When Neat is dealt a hand in his range, he sits up and gives us a long pause – his revenge on the world is the spotlight. He knows the charts and all the hits – he dares to three-bet ace-jack suited.

Meanwhile, every hand gets commentary – most of the table is in on it. Now you have to join or not talk.

Still, it’s the two beards that really have the most to say. Over and over, they describe basic strategy. Was there some NL25 meetup I didn’t hear about? Is there a microstakes convention going on?

Too soon, it’s time for them both to leave. They’ve shared and agreed on every poker streamer cliché imaginable. I’m back to wondering if they are brothers.

Finally, a big spot between them. Messy wants to call, but ultimately throws it away.

Neat pulls in the pot. “I expected you to have some calls there,” he sagely remarks.

Messy, after getting the best of it all night, has finally found his turn for displeasure.

“I would have, but that’s the problem – I just don’t know how you play.”