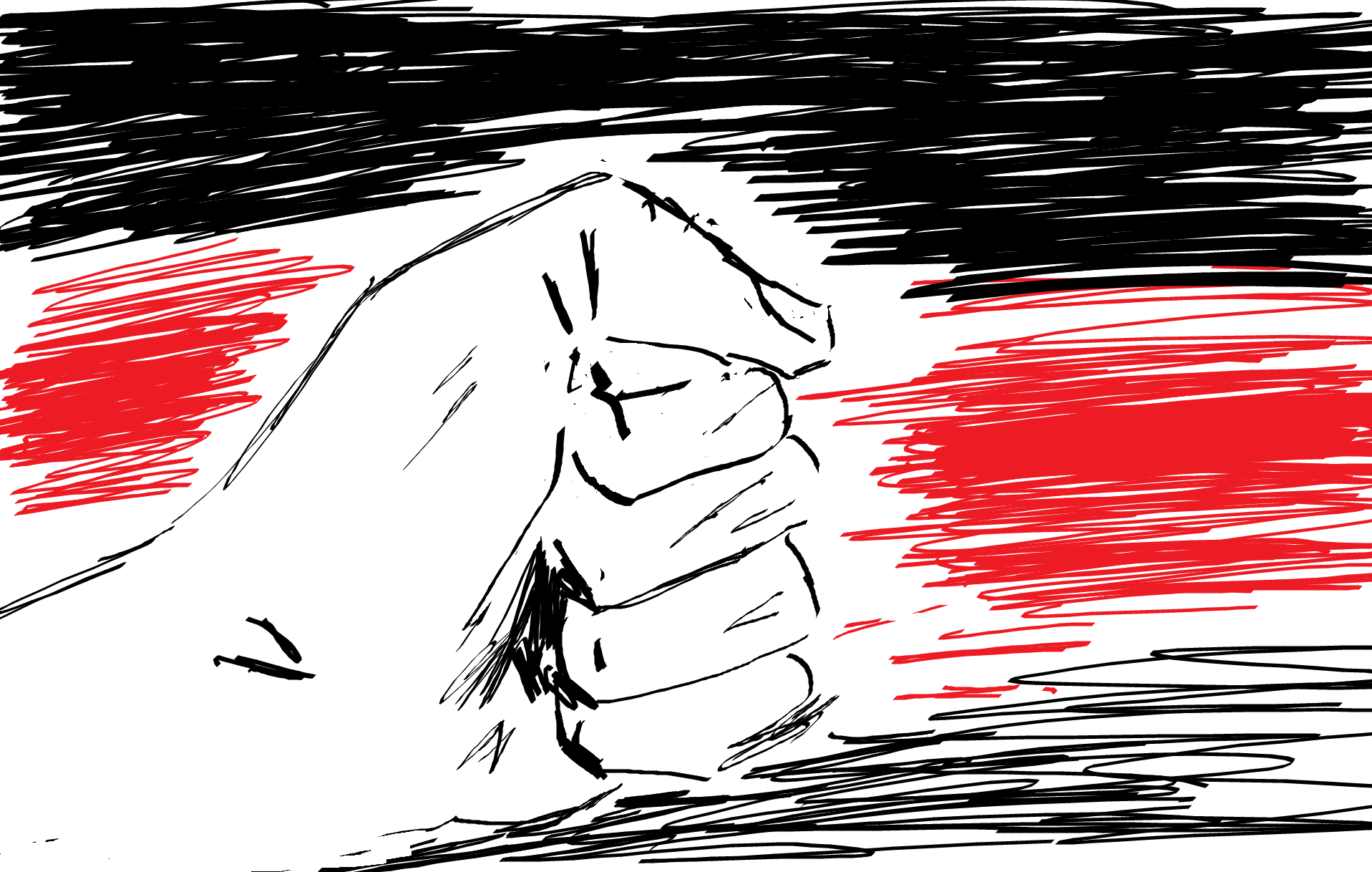 The screenwriters are gone. I’m alone at a long metal table in a back room of a café with my laptop.  The meeting had in fact been successful, but it was short. Two members with work scheduled to present didn’t come. While the group had deliberated, I stared at the chat app, waiting to hear from the one that hadn’t even informed us of her whereabouts or intentions. Maybe she’s somewhere preaching better behavior in “Trump’s America”. Maybe she’s dead.

I can live with a curtailed meeting, but don’t want to. After all, what do I do with myself now?

I remember when I took over running the show. The founder was a worried, thin woman who had recently left a high stress, high pay job in the tech sector. She had long, thin hair and a pained face– the eternally neglected wife, her spirit depressed by the mystery of her life. She was one of those bewildered people who had discovered but not accepted that checking off boxes of life accomplishments and subscribing to contemporary tropes would not lead to an abundance of joy. She hung on, however. Her calling card script, borne sympathetically of her world view, was everything a film resume might be – high concept, sweetly P.C, light, and bashfully romantic. It was her cloud.

She needed one. Her brown eyes were tired and pretty but what I really noticed was her delicate wrists. I focused on them, not merely because of the beauty of the feminine limb, but because she’d rub her hands together with anxiety. The cause was the work being shared, which was almost universally hopeless – or, more precisely, she couldn’t see the hope or the nature of the hope within.

The reality was that the state of the “scripts” was too inane, too amateurish, too nascent for her to help at all. Her training in gentle scolding and “constructive” criticism – as if observations that are true can then be reshaped without losing their power – were useless in getting to the heart of the matter: probably any matter. More mysteries for her. What we read didn’t have shape or they didn’t have logic or what is even more important – in trying to reach out to some ironically mirroring contemporary trope, they didn’t show their character: the sign and the light to the genius in all of us.

She tried to tiptoe around the pile of confusion and shit and sweat and effort, and say “you should look into…” She’d read an article, no doubt, with some tip on how to deliver bad news. She exhaled deeply when the critique was over and no bombs had gone off.

This wasn’t what she was here for, not at heart. What she really had wanted was to create that society, that circle you imagine and need. Where something magical happens, where everyone is supportive and gentle, like her protagonists.  Where pages of saturated future film flow like mint tea and we all enjoy a savoury biscuit and argue about sluglines and adverbs and how amazing someone is. Where even Ponytail Guy uncrosses his arms and smiles and lets out a (rather big) belly laugh.

Instead, the scriptwriter’s group was a live low-stakes game. Instead of her imagined circle of gentle geniuses, the community had shown up – and she certainly wasn’t allowed to wear headphones and sunglasses. After less than a year, she announced, without warning, that she was leaving the group. Someone had to step up or it would simply dissolve.

I didn’t just fall into the organizational role. I myself was coming out of a personal disaster, and one that could have been avoided had I sought help for the first one – but that just wasn’t me. I had to do everything myself. I have my own ways, however, even in my madness, and some nugget of wisdom stayed with me as I hid at home in the haze of Vicodin, the first real drug that actually sedated my feelings. (There’s an f’ing tip for you.) I had a giant projector screen, and comfortable at last, watched the entire Weeds series, able to laugh and analyze myself and the show. I was jealous of all the family, all the things people did that I never got to do, of little dramas that mean nothing, of self-discovery and fun – but I didn’t have to feel anything while knowing it.

There’s some magic, sweetheart. If only I could feel that good again.

However, after my halcyon days in a waking coma, I eventually had to go back to work. I needed something to help me carry on, though. That’s when I remembered that pearl of wisdom: you survive by creating your own society, your own support.

So I took over the group. I created that little society. And this time, it prospered, because I could handle the public: the community. I told them what they needed to know. With some choice comments, I lost irritating Ponytail guy: victory. I got us away from reading more than was necessary – sometimes just the tip turns out to be telling if not satisfying enough. I laughed at the comically bad and sighed at the badly comical. I wasn’t afraid to say something was not right, or dissent from milquetoast opinions. I fought to create a culture of actual feedback and resisted support and coddling. We lost the losers and the Contemporary Tropers. Our membership skyrocketed. I was sought for advice on how to run such a group, on how to make it all happen.

It helped me, I know. I looked forward to the meetings, to all the work. I did the reading, I took the notes, I showed the way. It was something to do – it was purposeful. Now, it never helped my own screenwriting much – not directly- because I always gave space to other members over myself, but really, that wouldn’t have mattered.

Because… I couldn’t finish my work. Something is still missing.

The table is long and cold – I can imagine myself at it, see myself on the other end. It’s a terrible realization. I took over the group many years ago, maybe six, and tonight it dawns upon me that I’ve been telling myself it has only been three. I only know this because now, with my second breakdown behind me, the impossible one, the one where Vicodin is helpless, I realize I’m still here, still wanting this group.

Only this time, this time, it’s not enough. And now, they want to break early.

No! I need to be useful! You can’t just leave me here with nothing to do.

Tonight, for the first time – although I had seen the trend rising, of course –  I’m just the referee. I don’t need to make commentary. Am I getting lazy? Too tired? Worn out?

No. They simply know how to look at things, how to analyze, and to express themselves without reserve. They did all my work for me. Great work, guys, but what about why I’m here? I need to be useful. And now our little society departs for the evening. What about our mint tea and sluglines and, and…

What have I done? I can’t be alone for the next few hours.

Because all this was really for some other reason:

I can’t handle any more of the Void tonight.

(Is it the second time the tragedy or is the second repetition the farce? They never explained that very well.)

So I stay after, me at this table whose hard edge I have been clinging to for six years. I did this once, right? Did it not occupy the time?

This time, though I can’t write. I go online looking for how to deal with extreme unhappiness. It’s all pretty silly. Then, I seem to find one that starts by sounding more realistic. The words almost match the gravity of the matter. I follow along anxiously, and then the author gets to an example: “You were expecting your friend to go out with you and she didn’t. Now you are unhappy and…”

Jesus Christ, are you serious? Is this a joke? Your friend did not go out with you and now you are feeling a little blue? What universe am I in?

I go through a few more articles, mostly in shock. Really, tips? Is this what they tell people?

Tips for overcoming perfectionism, tricks for not focusing on the past.

Tips aren’t answers. Tips are evasions of the central question.

Tips are the worst.

The other week, I talked to my only serious adviser once again. It was one year ago when he gave me his opinion of the matter, and it included impossible truth that no one can accept. Perhaps that’s what makes it truth.

Where all is right because it all ends.

Am I already there? What happened? The world grows further and further from me. The meetings will all end and then the endings will seem like happy memories, like fond recollections of watching comedies on opioids.

The opposite of tips and tricks is strategy. A real plan – the answer – in life or your poker game.

But I haven’t been able to solve this problem… all my answers have failed me. I can only hope.  And hope, as they taught me in my past life, is not a strategy.

People tell themselves interesting lies to make themselves feel better. I had stacked a competitor at the table the other night by exploiting his opinion of me. He’d caught me in several good bluffs. I couldn’t even believe one, where he floated me while I attacked another player then burned me on the river with an ace high call down that no one should be making. Sick play, bro.

So when I rivered quads and double potted it, he found agony. He did not want to be outplayed, not when I was serving up stacks. Then, he found a call. His body collapsed in disappointment when I turned over the pure nuts. He was essentially broken for the evening. Soon after, even with plenty on the table, he disappeared, wordless and stuck.

Yet a week later, when he was relaxed at a more friendly table with me, he complained about my call preflop, inventing that I’d had J4. I explained to him that I didn’t have that hand but a more reasonable one. “Not even suited, though,” he snorted, still smarting from the big pot a week later.

Interesting – it had been suited (of course). I had gone out of my way to stack him from the button with the always fun [jd][8d]

Whatever helps you, bud.

“Life can only be lived forward.”

Into what? Into the Void?

Your friend did not go out with you, and so you face the irrevocable disappointment of a life of pain. You read some tips on playing jacks. Here’s a trick for a satisfying narrative approach in the second act: having no happy memories and no future and no family and no children. Tip: Never limp. Here’s how to be aggressive while your body’s condition worsens into chronic illness. Cheer up, life can only be lived forward. Don’t complete the small blind so you don’t have to fall asleep and risk the next, always more terrifying nightmare.

The table is long and cold.

Stand up, step outside, light a cigarette, and think out your own answer.

6 thoughts on “The Void and the Man, Conclusion”