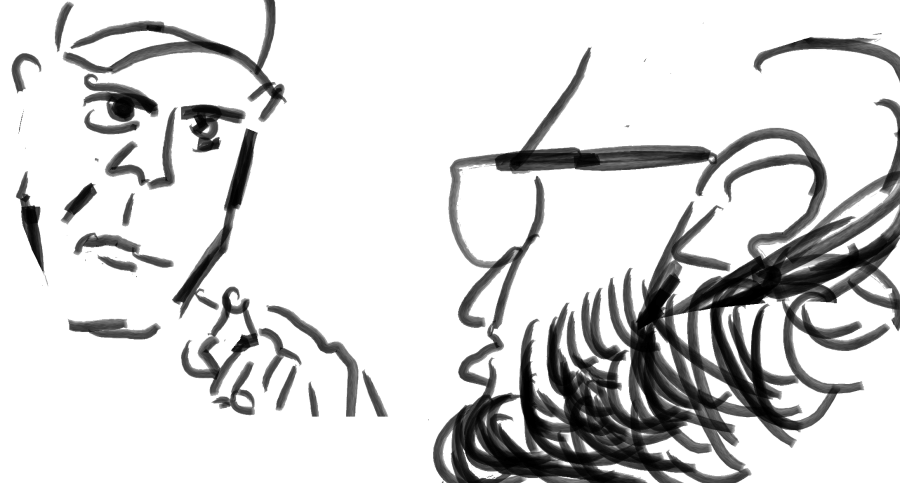 She was one of those Korean girls from the poorer segments: small, thin hair, no surgery. She wasn’t tall like the new rich or American ones that usually float the pricier parts of the strip – no spindling but muscleless ballerina body gift-wrapped in some off-rack evening wear send-up, all detail and no line. No, this one was hidden in layers of shapeless warm black. She wore glasses with aqua bottle-bottom lenses, probably not so much from late nights of reading but from the lack of some long-forgotten flourishing missing somewhere in the family tree, from screen time and hope stress and all of it too quickly solved by the duplicity of exhausted parents and their mis-educated HMO bots.

Too recently from the suburbs of the suburbs, in other words, and now lost on the turn in the desert.

It’s a difficult spot when you are playing blind, using “the strategy” and the discount heuristics some chinless euro gnome told you in the discord. The table is staring at you, talking about the hand. It’s bordering on the inappropriate but in fact you’re silently complicit, your lost girl eyes pleading to everyone for guidance. You’re about to seem stupid or lucky and everyone is going to dislike you no matter what for taking fifteen minutes in a game of passing chances.

She’s really trying, though: she wants to get this one right, to see the answer. In fact, I get up, go to take a piss, and when I return, she’s still deciding what to do. The table has slipped from chatty to anemically limp, and not just from waiting but from fear they’ll blurt out what she should do.

She’s flustered, concentrating on her confusion instead of the combos and her stack.

It goes on. I feel the outline of my phone in my pocket. Still, no one calls time. It’s supposed to be irritating but maybe I’ve seen too much, or really, just want to see something interesting. After all, I’m one of those web-addicted weaklings who is always fiddling for distraction, yet more and more not able to find it. There’s so much time to pass in poker and for the most part, that’s all we manage: to offer and accept content, as they so plainly call it.

Shit to fill your brain, stuff to keep it quiet. Content and containers, the moving image and the gaping mouth: yes, it’s the one time, the one thing they are honest about.

Today’s content is Eric Perstosterone and Mrs. Dr. Comicone blubbering inanities with Nick Vertucignali. Let me tell you again how authentic I am, how much I don’t care, they take turns saying. The show is not for the faint of heart, just as warned, because it’s so lame. Fake and gay, as the kids say to outrage the outrage class.

That’s fine, of course: most of poker is. Memorize some hands, study some formations, load up on clichés and be sure everyone knows on twitter knows you know. Great, now you’ve got content.

Is there anything actually good there? Something that pushes past level one? Something gained for your time? Blockhead’s pin pricks of devastating pathos, will they get you through poker? Sly Charlie’s occasional meditation? Billy’s one long session? Highlights all, but no, there isn’t much to sustain this poker life, really not much in the manner of art and its guiding, heroic pain that tells you what’s right and what’s wrong.

No, what they sell us instead is content. Get in loser, we’re going streaming.

Hard to watch, but still she tanks and waits and delays… just a bit longer. Unfortunately, she can’t keep track of the stack, and when she makes the call it’s with one chip, just the way the idiots show her on the vlog. It’s the way that always causes confusion, and most unfortunately this time for herself because she thinks she’s said “all-in.”

No one heard her squeak, however. The dealer is firm, and effectively right. She leaves a tenth of a pot back – not that it matters. It frustrates only because she is already tormented. Her tormentor, at ease and smiling and ridiculous and transparently winning, puts it in on a blank river; her tiny avian wingtip pushes in the rest.

She gets shown the nuts, of course, but turns over her hand anyway.

Yet after taking so much time before, she’s over the pity party very quickly. She’s not spoiled, she was never the type. No, this is heat, anger, resentment. In a flash she is standing over someone else, someone I hadn’t noticed in my short time at the table. It is, surprise, her boyfriend. He was respectfully silent during the hand, but now she’s furious, hurt, and needy. Imagine their talks about what to do, their arguments and agreements. It doesn’t matter now: she demands to him that that they leave.

Racks. The drama seems over. I need some more content and pick up my phone. Hey dummy, here’s a quiz with a bunch of random solve spots that teach you nothing, like and subscribe, moron…

Yet it’s not over. The boyfriend, placid if weary, says he wants to play one more hand, even as his chips are in the rack already. He’s not a child, this one, but full-headed and stocky. His skin is dull but his face is not; he is noticeably in control, older than the kids his age. She stands by glumly, her dove hands buried in the black coat, and won’t argue with his request.

So, when it is three-bet in front of him to eighty, he jams for the two thousand in his rack.

He gets called and wins.

They walked off together, arm in arm. I want to say he handed the money to her, but maybe that didn’t happen. What I saw for certain was that they looked at each other briefly, knew things were okay, and that they were going to share in everything he had just ripped back from the hurtful world.

He had gambled for her and won. That’s something to live on.

One thought on “The Hero”