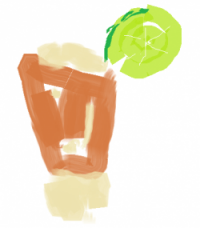 While I assemble the requisite ingredients for Libation to Variance #1, as promised– including a week for the espresso beans to repose in the rum- there is nothing like a little premature relief from the runbad.  Tonight I put in what can only be called a restrained session and version of myself, all to excellent effect, yielding a 250 bb win at 5/10.

I have very mixed feelings about one spot, however- and my quitting point.  For the hand, I had opened JJ from under the gun.

It may not seem necessary to say this, but I have a very strong range here.  I don’t have any real limping range, so I have to fold some pocket pairs and turn way even some very good aces from the door.  So after an action player calls on the button, and a fairly tight passive puts in a very large three bet, I am in a tough spot.  He started the hand with somewhere around 100 bbs, and now I am getting only about 9:1 implied odds.  He had this look on his face that screams big hand: the easy determination that card courage gives even a limp calling nit a chance at a score.  I just fold.  I think the guy has aces.  It doesn’t feel like aces, but there we go.

Evidence is a strange thing.  The night before I go into a rare spot where I bet called the river.  This is not a common line for me.  I have no problem shuffling off even near nut hands to unbalanced aggression, and I understand what river raises mean, despite everything else.  So here’s what happened.  A shifty, drinking player limped in strongly, clearly with a hand he somehow liked. There were two calls and I checked Ad2c, a gimpy holding with a small future, from the big.  Raising here would be silly, especially with read on EP limper.  On a K34dd, I lead into the field, as I will with all kinds of things in this spot.  Most kings are raised, and with the ace of diamonds, good things can happen on the bluff or value front.  EP limper calls and the others fold.  I think he’s going to continue fairly wide, so the turn card will define what happens next.

It’s an interesting one: another king.  I had represented the king on the flop, and he called; well, now it’s hard for him to have one.  It’s thin but I bet again, and he calls.  The hand is making little sense, and I will have to give up on most rivers.  Either my read is wrong or he just won’t let go of diamonds.  A five would be nice!

So it’s a five, making it K34K5dd where I hold A2.  If he has nothing, whatever I bet is pointless; but if I’m wrong, I can get huge value.  He didn’t raise, so unless I just got supercoolered by K5… but no, impossible.  Remember preflop?  He has a hand he likes, a pretty hand.  A hold’em hand, as one of my former associates would say.

So I bet huge, 2.5x pot, looking for the big payoff from a nice king.  However, something funny happened on the way to the bank.  He gets that “nuts” face that blithe players do, and announces all in.  Excuse me?

Now I’m torn.  Rationally, the evidence tells me he can’t have it.  All the handreading adds up to me winning, not him.  Why are there rain clouds over my gutterball parade?  My feeling is that I have to be beat, but the hold’em scientist in me says I need to stick with the empirical.

Plus, my overbet leaves me in a horrible spot. I’m getting 3:1 and I should be good often.  I make the call and get shown a hand I hadn’t even thought of… 55 for the rivered full house!  I am in shock and have to stare at the board for a moment.  My opponent tells me it’s a bad beat, that he knew I had a king.

So back to the 5/10 spot with jacks, I don’t feel like he has aces- the sensor screen is blank- but this does not look good empirically.  He must know I have a monster and he wants to get all the money in.  So when I let it go, and of course the village bicycle loose button makes the call, I have to see the jack right in the flop.  However, a strange thing happens: he just snap folds to a significant bet from the button whore!  I was wrong: the blind was just attacking me with AK as blockers… as he should.  I overvalued the information, underestimated my opponent, and therefore undervalued my holding.

Nevertheless, I walked out with rent, bacon, and rum money, so who am I to complain?  However, when I walked out deserves some thought.  It was a tad bittersweet, keeping to good mental game parameters and leaving after six hours.  The game was getting better, and the gathering of weak, action players in unheard of numbers was almost frightening, like zombies being drawn to a clatter and din.  They just kept pouring into the poker room, stumbling, biting at the staff, spilling chips, running into each other, putting their elbowprint on the list.  I retired from the field to visit with friends, but in doing so I left behind heads to chop and the whole night before me.

To what and to whom was my real duty?

In any case, if last night meant anything, the games are good again, it seems, and getting better.  Players are moving up, money is flowing, pros have absented themselves for the lucrative donkament scene down south.

A storm of action could be breaking upon the Village, one that could change my year, or break me entirely.

Tonight I drink carelessly, but I see hard work before me.  Bottoms up.

2 thoughts on “The Gathering Dark and Stormy”