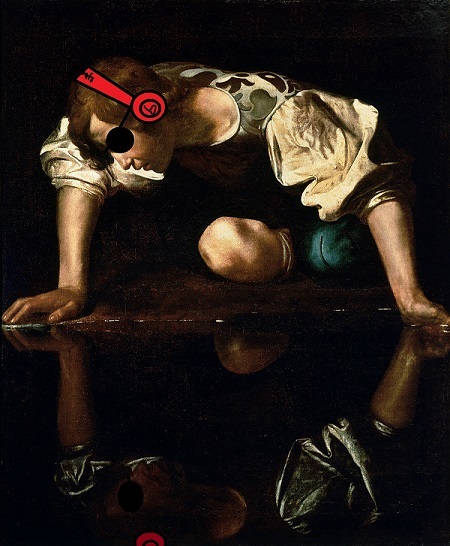 You are a serious poker player. You post hand histories in the forums, subscribe to the poker training sites, and watch all the latest vlogs. You even have a coach. Yet you still aren’t crushing the games. Probably variance. But humor me for a minute, what if there is something else holding you back?

Poker players are a conflicted bunch. We “espouse freedom but crave authority,” belittle our opponents yet long for their respect, we want a social game to be solitary. Some of us even want poker not to be gambling. These conflicts lead to frustration and stagnation. But we are merely part of the larger American culture, diagnosed in Christopher Lasch’s 1979 book, The Culture of Narcissism*. And we can’t change unless we recognize, reject, and escape this culture.

Taking a step back to the myth, Narcissus was prophesied at birth to live a long life, so long as he never knew himself. Later, after rejecting a lover, he is cursed so that if he ever fell in love, his feelings wouldn’t be returned. Narcissus then fell in love with his own reflection in a pool of water. He didn’t know himself, he fell in love with a reflection he didn’t recognize.

So, what is the culture of narcissism? It’s a culture that gives “increasing prominence and encouragement to narcissistic traits.” Traits such as “a certain protective shallowness, a fear of binding commitments, a willingness to pull up roots whenever the need arose, a desire to keep one’s options open, a dislike of depending on anyone, an incapacity for loyalty or gratitude.”

It’s people wishing for admiration over esteem, celebrity over fame, envy over respect. And it manifests as “shame over guilt; rage over anger; … your future over your past.” Shame is about image, guilt is about remorse. Rage is directed out at the world and impotent, while anger is within and can be productive. The future is valued because it doesn’t exist; we can conjure up any fantasy we desire. While our past, every action and moment leading to this, is what defines us in the present. (This is the culture that would gladly forgive Chris Ferguson in exchange for a weepy, public apology, but will hold a grudge after a voluntary five-year leave.)

Narcissism acts as a defense mechanism. We have learned to assign power to others (parents, government, elites, etc.) but not to ourselves. Although we grasp the gulf between us and the elite, we don’t want to risk our identity by changing.

A defense against what? Against change. We use narcissism as a defense against having to change. Instead of changing, we distinguish ourselves by adopting the signifiers of the elite, although we lack their ability. If we are confronted with our failures, we lay blame at the feet of experts. Lasch describes this as a paternalism without fathers. We are stuck in childhood.

We assign power to the poker books, to Doug Polk, to Phil Galfond, to Fedor Holz, but never to ourselves. We buy their products, wear their gear, and use their language. Adopt their strategies, follow their hand charts, and make the standard play because they told us to. If we fail, well at least we did it their way.

As Nick Howard said, Anyone Can be a Successful Poker Player, EXCEPT You because you’re still asking for permission. And it’s related to Why You Struggle at Low Stakes Poker, according to Persuadeo.

Why do you play poker? Who are you and what do you want? Why are you here, reading this blog? If you play for fun, this isn’t about you. Do your thing, have a blast. But if your answer is something along the lines of, “Well someday I want to be…,” or “I’m actually pretty good, other than some mental game leaks,” then I’m talking to you. If you don’t even have an answer for “why” then I’m absolutely talking to you.

If you want to master poker, then learn the fundamentals, understand the theory of the game, find the deviations, and finally build your own strategy. A strategy is more than  tactics, more than a list of heuristics. Building your own strategy requires knowing your strengths and weaknesses and having your own ideas about the game. The confusion borne of having a jumble of ideas floating around your head, each from a different poker thinker, never ends until you take responsibility and develop your own ideas.

“Poker reveals to the frank observer something else of import – it will teach him about his own nature. Many bad players do not improve because they cannot bear self-knowledge. The bad player will not deign to determine what he thinks by watching what he does,” as David Mamet wrote. Step 1- be a frank observer. Step 2- bear the self-knowledge. Step 3- ?

I was born right around the time Lasch published his book, right into the culture of narcissism. After fumbling around for thirty-some-odd years, completely clueless about who I was and what I wanted, and despite all my privilege, I finally bottomed out. My girlfriend (now my wife) broke the news to me about just how insufferable I had become. Although I was somewhat surprised, I accepted her appraisal and decided to change.

I began meditating, assessed my strengths and weaknesses, adopted a philosophy of life, and slowly sussed out what I wanted to accomplish. Lo and behold, I started having impulses that I didn’t indulge, learned my limits, and began to become a better person for the people around me. (The aim is self-knowledge and personal responsibility, not the cult of self-improvement.)

This didn’t make me an elite poker player. I’m still working on that. And I have had to confront these issues again in poker-specific ways. But I can say that I know myself and my limitations, and that I’m building something unique to master a game I love. I’ve suffered my share and feel like I’m on a path towards something better. So, although none of this will help you master poker, I hope that it might help you become someone with the capacity for mastery.

*All quotes are from this book unless stated otherwise.

11 thoughts on “Poker and The Culture of Narcissism”