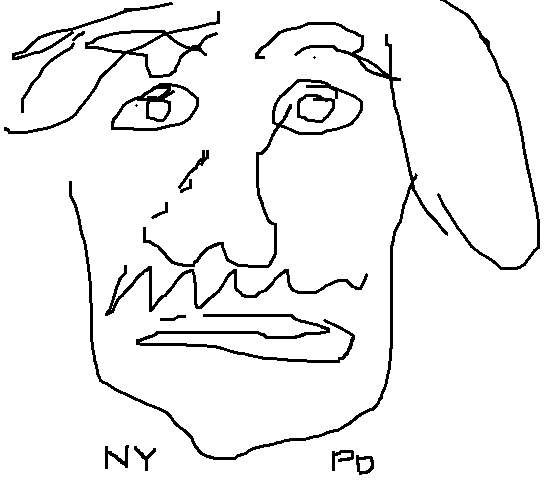 “Loitering for Gambling” is the citation, handwritten and barely readable on the pink carbon copy.  It’s a shameful one, not for the gambling, but for the “loitering,” which is anything but what I was doing.  Or is it?  There are many other things to do on a bright day in the city, and I left the museum of Natural History before it closed.  I’m here to continue to earn; I’ve beaten the game soundly up until this point, despite its high rake and one tricky player who has taken from me with some judicious slow play.  Ultimately, poker is on the low end of the societal productivity range and the title of my crime irritates.  The gambling part is accurate but hypocritical.  Poker players did not cause the great depression or the housing bubble, and nor would I ever play a pure game of chance.  Four blocks south, chess players hustle out games for a few bucks in broad daylight.  Do they know they will win every match?  What odds are they laying on their mastery of the game? Poker is about wagering, not gambling, and we who would win press our skill in all our chosen trades, not merely empty headed bets.

However, I’m not worried about the money at the moment, and except for this ridiculous charge, I am amused at the situation.  The loss of my seven hundred dollars, confiscated for who knows what purpose, will not sting until the next morning.  I have no other income but poker for the moment, and could have lived on that for weeks.  I also have to worry about the cost of the crime itself, because even though the apparent ticket is small, I am supposed to show up to court on a day long past my New York vacation.

I also wonder about the officer who delivered the bad news to me.  Does he wish he could charge more?  Why is he ever so slightly defensive, and where is the bullying attitude of the first hour? Does he not care because the confiscated money, probably upward of six thousand dollars from the table, with an unknown amount held by the host, is paying for something he wants?  He has answered a simple question with a moral, high handed tone, but it only demanded more questions.  Now I pass from ironic contempt for the law into exasperation, because I’ve realized I have been seated in the first row to a bit of off-Broadway theater.

I have one more concern. While I was sad about the money, I was positively frightened at the prospect of having my bag taken, as it contained a priceless journal of my notes.  I ask for it but won’t let me go back to the living room.  Instead, the junior officer I had bantered with grumpily rises from the host’s bed and retrieves it.  He sets it on the bed and rifles through it, asking if there are any illegal substances.  I give him a pointlessly florid “no,” obviously still anxious about getting it back.  When at last he hands it over to me, Farina reappears.  He ushers me into the hallway, where he indicates he wants to ask a few questions before letting me go.

While we pass through the entry into the small staircase we had all used to sneak up to the game, and which was apparently used by the police as well, I notice the crumpled door and have a moment to think about the host. No doubt the management was or will be apprised of the break in, and the host’s worries will not include a only new door, but finding a new place. While scouting out the New York scene, I noticed his brother’s poker game had been busted. Who knows how many times they have gone through this. With an observable rake of up to ten percent taken from all preflop pots that aren’t chopped, it’s likely they are pulling past $200 off the table per hour, a lucrative home business that seems to be good enough not only to provide income for the host, but for dealers and prop players.

Farina, it turns out, is less interested in the economics of the game than in a very specific query: the detective wants to know exactly what happens to the player money once he buys in. I’m not much use, however. I never saw where exactly it ended up, and in the moment, may have even forgot that there was a brown box on a desk near the door, away from the game. He makes reference to a safe or some other holding; clearly they want details about where the final take goes.  I thought they had gotten it by raiding the safe, but he is unconvinced, perhaps, that they’ve taken it all.  The recent bust of Wendy’s Club in mid-town made reference to over ten thousand. In truth, aside from the relative secrecy, the fancy setup with a nice, backlit table, Paulson chips, and a wide screen LCD, my comfy and completely legal game back home often has more money on the table despite smaller stakes. We get past a hump in the conversation where I give a wrong answer (clearly they’ve been observing or the host told them how often I’ve been coming), and then Farina gives me a sly send off. “Sorry you got caught up in this.” Probably a relief to some, but sorry might include a receipt for my confiscated money. I don’t bother to ask.  Maybe that was a mistake, but what I discovered is you don’t really want to be around people with guns and handcuffs, no matter who they are.  (With time away from the adventure, I have become convinced that Farina was simply flummoxed by how small the game was, and was trying to figure out if he had been tricked out of what he expected to find.)

Amused by the experience, I head out into the New York City sun. It’s a beautiful day, one intended for a little loitering. I’ve made a habit of celebrating the evening’s take at the food truck in Union Square. The secret, I think while I walk, is the fried plantain, a thick and sweet slice that matches up with the juicy beef festively. Everything here can take a little roughness and gusto; we’re all sweating and the city streets are hard and brutal, so street food, when it’s good, is the best way to go. Unfortunately, because the game has broken early, and the truck is there but unready for service.

I want a drink and a substitute for the amazing Peruvian protein, so within a block I run into the end of good looking happy hour at a casual bistro near the New School. The same World Cup game Farina and I watched is now in the second half, with the score still tied. I settle in for white wine and six oysters. The game is an excuse to socialize, and soon an adroitly dressed and smart woman in her fifties is talking football. Her hair is long, as it probably always has been, and pulled back into a ponytail.  Her skin is fading into age but it is still supple, the benefit of lotions, cleansers, a good diet, but most of all, success. Our conversation, in turn, attracts a young pretty thing with a heavy blotch of lipstick. She is thin and dollish and pale, a sweet human being who laughs out of nervousness, and also when the bartender flirts with her; perhaps I’ll have a chance, too. The three of us talk about the city and the people and brown hair versus blonde for a bit, when Lipstick has to go meet the ever-waiting “friend.”

It’s not the end of the afternoon for me, however, because the older woman, a lawyer and a successful denizen, is curious as to why I’m in her neighborhood. After all, I do look badly warmed over and haven’t shaved since I left home a month ago. I probably smell. I decide she really wants to know, and I tell her the story, from battering ram to oysters. I hadn’t brought it up, because it is a seedy thing, poker, and explaining being stopped by the police for an illegal activity is not always a social lubricant. Good conversation and new people often hinges on a sort of confidence that something fun or useful or exciting is being shared or learned or done, and further, that no one really wants to use their emotional energy on your problems.

However, it turns out I have a surprisingly sympathetic audience, even an empathetic one. She used to gamble and play a little poker herself. She tells me she knows quite a few lawyers who play (do they know Puerto Rican cops?  Small world.), and she reiterates, as I need to be told, clearly, that it’s the poverty of the game that got me in trouble. While going on in this vein, she announces she’s going to give me the best legal advice I’ll ever hear.

“Stay in the middle, the in-between, if you want to continue with this thing.” She means that the low stakes and easy access to the game is what got it busted, and I point out to her that recently a very high stakes ring of play was broken up. “Exactly,” she says. “Don’t go too high or too low. The games I know will never be broken up. They are hard to get into and no one knows about them and the police don’t worry about them.”

Sound advice. “We have to find you a better game.” I write my email address on a napkin, and push it toward her. She folds it up instantly in an act of discretion she is obviously familiar with, and promises to see what she can do before I take my leave.

I walk home to Chinatown in the bright city twilight and the slow sunset of intoxication.  My summons to court is in August- maybe a trip and a game are waiting for me.

Meanwhile, in the Annals of Gambling Justice