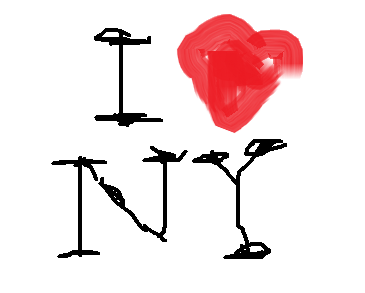 Note: I’m staying again with a friend in Manhattan so I was inspired to write up something that happened during last year’s visit.

Without connections, it takes a bit of time to get into a private game in Manhattan.  There are endless Craigslist advertisements, but none of the hosts respond directly.  Maybe this is security.  Maybe it’s bad customer service.  Maybe I sound like cop.

So when I finally do get an invite after a week and a half of queries, I’m eager to play.  As it happens, my time in New York wasn’t a regularly scheduled vacation or a junket to see a few Broadway shows and pay for $15 sandwiches.  I have just quit the organization I have worked at for most of my adult life, and I need as complete a decompression as possible.  My mission is to forget a decade of office and organizational politics and live anew for a month.  It’s been too since I trudged these dirty and exciting streets, and the idea that I would ever play poker for a living would have been even more absurd to me at that time than if you had told me I would take up underwater welding.  So getting in the games isn’t just fun, it’s part of the new me.

When I arrive at the mid-town address, I meet the host outdoors.  He’s an agreeable, polite but very casual sort.  He posts a lot on Facebook and doesn’t seem overly concerned with privacy or consequences, and seems to be enjoying his life breezily. Maybe out of business school a few years, low-level finance jobs in his past, and still in his late twenties, or as the ever so slightly thinning hair suggests, getting into the next decade.  He’s getting a little bit of a tire around his waist which he hides with a loose fitting collared cotton t-shirt.  He’s meeting me outside in order to check my ID and ask me a few questions.  He’s surprised by my out of state license but in fact, this novelty makes the process quicker, because he doesn’t see any way I can be an officer of the local law.  My lack of a business card- apparently another sign of a private citizen- hadn’t sat well with him online, but now all is explained, and it’s time to get into the game.

When we enter the building, the fragility of these types of situations becomes immediately apparent to me.  It’s mid-day, and residents, professionals, and deliverymen are busy in the foyer and hall way.  I look a little suspicious, with my dumpy clothes, middle America body, and anonymizing hat pulled almost to my eyebrows.  I and others like me can’t be good for the sanitized appearance any place of business that is not serving liquid poison generally aims for.  We vanish up a side staircase, small and probably used only by staff when this building was something else entirely.  I am sure it is deliberate that we are not mingling with the upright, likely uptight, elevator crowd.

The host knocks on the door, calling out his name.  Slots are pushed, a chain rattles, and several locks clack.  I’m into my first raked New York game.

The apartment is on the middle floor of a low-rise, and as you might imagine, it’s not some spacious basement with a cage and suspicious eastern Europeans hunched underneath whining fans.  The table is set up in the host’s living room, and probably gets put away afterward.  It’s a nice place.  Tall windows are shaded by heavy curtains (it’s hot as hell out and no one wants to see the sun).  A large screen television plays the World Cup.  The ceiling is high, the chairs are comfortable, there are plants and side tables.  Everything is clean.  This looks like a great home game, not a house of degenerate poker junkies.  I’m introduced to the host’s wife, young, pretty, and noticeably pregnant.

I sit down and buy in a tad short.  The chips are an assortment of mismatched Paulsons, a classy and authentic touch.  Equally authentic to early afternoon poker, however, is the lack of players.  There’s me, the host, a dealer, and a bookish if bewildered looking woman.  Her appearance is confounding, as if she got lost on the way to her job at the library and is now too excited and scared to leave.  I get the feeling that she either has a serious gambling problem, or is in fact yet another, perhaps junior member of the staff.

The host assures me that more players are on their way; in fact, “good action” is coming today.  My original search for a game revealed this to be an overriding concern.  “Donkey Action!”  “Crazy Games!” etc.  Of course there are other things a prospective player taking part in an illegal activity might be concerned about, but if he’s foolhardy enough to find his game on a public forum, he’s probably a gambler off the felt as well as on.  (A few do declare their game “Safe,” but does that really get anyone hard and just as importantly, do they believe it?)

Sure enough, a buzzer starts clattering and the table fills.  They are far better dressed than I am, and conversation reveals them to be working Manhattanites.  Stock brokers.  Traders.  Accountants.  The markets are closing or they worked against foreign time. They have slicked hair and expensive shirts; one puts away a lush Turnbull tie and rolls up this sleeves.  When they buy in, I observe their wallets, which are new and plump.

Once we start however, backgrounds fade, just as in any other poker game.  Someone bets, someone raises, and faster than you can say call, uniforms, social status, and even bank accounts quickly fade into irrelevancy.  The flashy guy with the tie runs out of buy ins or will or both.  The soccer match occupies everyone’s attention.  A super bad beat salvages someone’s day.  Pretty soon I’m hungry and ready to cash out.  When I meet the evening sun, my eyes are blinded as if I’d just come out of the cinema.

This game suffices for me for a couple weeks and I stop looking for others.  Every other day or so, I drop in after a good round of tourism.  A few patterns develop.  I’m beating the game pretty well.  The bookish woman does turn out to be the junior prop, and they tease her mercilessly with the nickname “No Chips.”  I felt the host several times, and am at first worried I am not going to be invited back.  When this happens he doesn’t ever rebuy and is glum for the rest of the session.  However, when I start counting the rake they are pulling in, I see he is on a sort of freeroll, if playing was really his desire.  Later in the trip, he becomes apparent he has been talking about getting some chips out of me, because when I take a big pot off a new, very comfortable but arrogant player, the new ringer is frustrated by my disguised holding and shoots anger and disapproval of my play at the host, “You said this guy was good!?!”  He expected a turn check with my type of hand or hoped I was overplaying an overpair, and responded with one of his own slowplay, one of the most tiresome aspects of east coast poker culture.  I was betting until I got there, west coast style, overwhelming what I think was his call/call/call line with bottom set.  So sorry to disappoint you.  Other players helpfully pointed out that I would have check called my way to victory anyway, if I had been playing correctly.  So sorry to disappoint everyone else.

At the end of each day there, I enjoyed the same Peruvian style hamburger on the sandbaggers’ dime, whenever I could find the food truck.  Medium rare patty, fried plantains, thick tomato, and a magical medium peppery sauce, deep as the as the ravines of Machu Piccu, smokey as sacrifices to Viracocha, slowplayed to perfection over the black grill.  Worth the cross country trip alone.

As my stay in New York winds down, so does the poker.  There are so many things to do in the city, and I have only started.  I start skipping days; I’ve paid for the trip and am going to miss the city. On the Friday before I take off, I finally get to the Museum of Natural History.  It’s a true wonder. I imagine what a magical place this must be for the endless tours of schoolchildren who fill half the spaces and dart around my lumbering body.  It takes hours to make even a cursory view of the exhibits, and I’ve been here for most of the day when I get the text from the host.  “You in?” It’s Friday, a day I would imagine would be a popular day for games and thus most likely gather the attention of the law.  I told myself I would not play on this day, and so far, haven’t. It’s about 3 pm, and I can continue to enjoy the amazing museum for a few hours.

Or I can be who I am, a poker degenerate who can justify anything.

A subway ride later, I’m in the game.  I’m fighting the good fight, beating a slightly tougher group.  However, the maze of the museum, the MTA, and the game have my stomach growling.  I’m hungry and am considering leaving early- but something is bothering me. One guy has been driving me nuts with limp raises from under the gun.  How can he have it each time?  He’s a tall Korean, well put together in every way, and could be on the high IQ side.  He doesn’t play a lot of hands, but still might be exploiting my late position raises, as he is not raising anyone else after his limps.  The frequency is just too high, unless he’s running very hot or has a balanced l/r range; but then, my isolation rate is too high, as well, which he could be aware of.  When I pick up tens on the button, where I should be weak, and he does it again, I decide to go to the felt against his latest reraise and push in the four bet.  He’s not deep and I will risk one buy in with this maneuver.

Unfortunately, he’s got it- aces.  A lot of work at a high raked game wasted because I had to stand up in the line of fire.  He collects the pot with that self-satisfied look, clearly indigenous to both coasts, that never ceases to irritate me.  What a good play by me.  Let me just tuck those chips right nicely into this stack where I imagined they belong.  Oh it’s on me again?  Odd, it’s not aces.  I have to add on another two hundred to continue.  I look at the clock.  A burger calls to me from Union Square.  Maybe I should go.

All of a sudden the walls are shaking and it sounds like a sledge hammer is being applied to steel.  One of the props who was sitting out shouts “it’s the police!”  The host screams that he’ll get the door in order to simply let them in, to stop pummeling it, but there is no response.  The thunderous strikes continue.  I have no idea what is coming through that door.