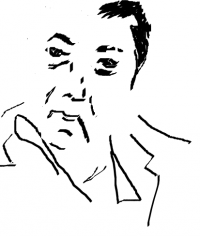 So said Mr. Farha in one of those early, most magical years of High Stakes Poker.  The combination of personalities, the dynamic of the hosts, and most critically, the lack of overproduction, which made the game seem real, accessible, full of people, and thus, fun, made those initial seasons of the now legendary show ripe for repeated, enjoyable viewing.

It’s getting late for me, too, this month, and this year, to turn things around, and some gambling has been in order for quite some time.  It’s late tonight, too.  Already this session I have lost four straight flips versus short stackers; hard to swallow but I plowed on, stuck again.  However, one player’s gamble is another’s loose wire, apparently, and I was soon to be berated for taking two close spots in a smaller game with The Village’s weekday regs.  The catch (besides the cards I would need) was that no one, even the second player, a regular in bigger games, apparently knew the math, and I had to hear the kind of insults I try to reserve for the padded wall of my mind, the drunken symposiums of the Coven, or this obscure outlet.

Both spots were created by preflop errors by my opponents.  In the first I attacked a weak looking iso with a blocker hand, A5o, and ended up facing not the raiser, but a back raise limper.  I knew his hand was weaker than a normal limp raise range, and that it was a response to my relentless attacking.  He had witnessed me get a player to lay down AQ pre, whereupon I showed A9, which might as well have been two jokers as far as these guys were concerned, ruffling the nitty daytime cluckers’ remaining feathers.  (Which was the point:  Games where people fold AQ pre, even if “soft,” just aren’t that good.  If you are waiting for coolers not only are you doing it wrong, you are restraining action.)  As I pondered the situation, I realized I was getting about 2.1 to 1, really all I needed vs what was very likely a low pair now monkey shipped.  I thought his range and the spot looked like precisely like this:

I made the call and won, but the table and my opponent was flabbergasted that I would take such a weak holding against a fairly tight player whom I was just teasing about playing too tight.  However, recognizing the spot and knowing the equities made for the right kind of gamble, one where I don’t just surrender my pot share because of monsters under the bed, even in an innocuous spot against a short stacker looking for annoying amounts of leverage.  His error was subtle, because he did recognize that he possibly had the best hand.  However, by knowing what his range looked like at the moment and what my image was, I was able to dismiss the dominating aces he would fearfully raise, and this imbalance kept me from seeing a more regular limp raise, short stack ninja range where calling is foolish:

That set the stage for a slightly clearer call, although the hand itself was more complicated.  I opened a pot late with Q2cc, just stealing the button if not the blinds, and got min raised.  This fishy raise, reeking strength from a player who can beat this level but is pretty much toast (delicious, buttered sourdough) in higher games, had me concerned.  However, combined with a ridiculous overcall from the same shortstacker in the blinds, I was left with no choice but to call, getting 5:1 and full stacks in front of the button.

The flop was a pretty gross 789cc, smashing the blind’s range and perhaps mine, but certainly not the min raiser’s, who was in position.  The blind, a nice man who makes the game pleasant and light, led out with his stub, four inches of steel, leaving me with an opportunity.  I can raise this board, not with impunity, but with some conviction, in an effort to get an overpair to fold, and at very least, shut out AK’s equity.  The only hand I truly fear is Akcc.  However, after some thought I consider it unlikely that button villain has this hand, as he would more likely bet larger pre.  I think he has AA or KK.

So I represent this nasty board and raise the donk lead to clean up my equity and still be dominating the shortie.  However, button villain is not having any of it, to his credit, and now puts in a cold flop 3 bet for the rest of the 110 bb or so effective stacks.  With the short stacker all in, now I have to call 360 to win 820.  This takes some time to piece together. I have to reflect on the button’s confidence and consider AKcc again, which I had initially dismissed.  While I am doing the math- everyone is talking and the moment is stressful- he calls clock on me.  At first I am worried that some of my outs are blocked.  If button has the ace of clubs, now my equity drops from a clean thirty five percent to thirty two or so.  As I complete the calculation and realize he has one type of hand here- AA/KK- I decide I am absolutely priced in to sticking in the money, whether he has the Ace of clubs or not.

We all watch the runout with anxiety- it’s an early weekday and this is a bigger pot for a small room with not much money, depressingly, spread between the tables. (Winners love to hit and run here, worsening the effect.) The turn brings an offsuit ten- probably good for the blinds player, and no good for the bigger stack- but the river is a low club.  Button villain turns over aces and I table the winner, scooping a big pot and erasing another potentially painful loss.

However, villain is unhappy and tells us all what a dumb play I made, repeatedly.  However, even if he has one blocker, I am still priced in.  The only real disaster scenario that looks relatively likely is if button has the Ace of clubs and the shortstacker blocks me out with two clubs of his own, leaving me in fairly brutal shape and actually priced out with only six outs and a bit of RIO.

However, looking at the hand from his perspective, it’s not entirely such a wonderful spot for him.  He’s never going to be more than a marginal favorite, and has run into the bottom third of my range here.  In fact, he does not have to go broke, as my hand looks like it will hit this board more than him, and I have many sets, straights, and two pairs would be played exactly like this.

Nonetheless, his preflop raise sizing is the real story if he cares to look in the mirror.  It’s a giant mathematical and strategic error, the real author of this spot, and exactly the kind of stuff I just wrote about.  However, I understand his other important decision.  In truth, both of us acted correctly on the flop, where others may not.

I faced, continuing the theme, a very similar spot later in the evening against a woman who has just held over me for most of our pots this year- the same one where I detected a rare semi-bluff from her.

Again, it was a close situation.  Holding KJss on Kc9s10s, the poor shortstacker again put his head into the saw with a poorly reasoned lead.  (This man is so nice that now both Gargamel and I have tapped the tank and offered to help him out at some point, but he is too stubborn to win, in a sort of inversion of the American paradigm.) Villain is more than tight- she is a nit- and has hit this board quite a bit of the time.  Naturally, she raises him, and I am left with another in-game math spot.  Fortunately, I know her so well that I can take AK out of her range, and put her on exactly Aces.  Her preflop sizing is so unbalanced that even the one blind difference allows me to sift out her range beautifully, and the flop raise confirms it, even though it has no poker logic on her part. This means all my outs are live and I have a touch more equity (such is the nature of domination).  With the overlay from our friend the self-flagellator, and I having about 55% of the main pot share, maybe more, I can gamble in good conscience and again try to break another player (oh please let it be both) satisfyingly.  I ship it in, thinking maybe she can even fold aces every now and then- more of a wish than a plan, but it only makes the spot better.  She takes her time, but I can see it’s mostly an act combined with the feeling of desperate confusion, and another big pot goes down.  However, there was no reciprocity for our earlier clash, where my great read was punished, along with all other good deeds, keeping me from a big night.

With all the months of painful runbad, though, even this minor win is cause for deep relief.  It’s been so hard to make it out of the casino with my investment lately, I am almost bewildered to be reclining in victory.  The five figure months and cash storage problems seem like a lifetime ago.

At the bar, a new employee takes my order.  I watch in amazement as she tops off the pint glass with ice properly, then delivers a perfect salt rim.  I’m in love.

It’s late and I’ve gambled. Things are looking up.

(Now wasn’t there a spot where Elezra laid down Q2 incorrectly… haha.)

2 thoughts on “It’s Getting Late, We Are Going to Gamble”