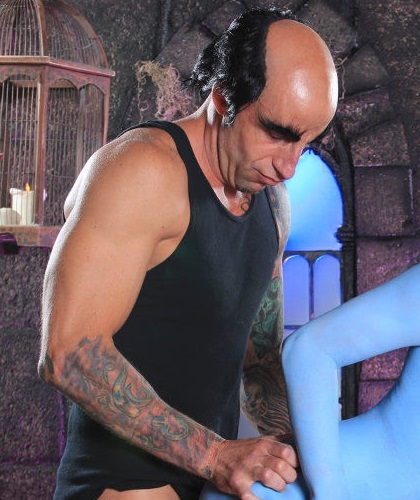 I’m in the midst of a downswing and getting best handed a lot. Instead of writing about how I want to tear up the cards and flip the table, I figured this would be a good time to write about my favorite moments in poker. They’re in no particular order. Let’s roll…

Yeah, I Get Action
Most of the table consisted of the usual level 1 thinkers saying to themselves “derp, I hope I make the nuts so I can cold deck that Gargamel asshole”. There was one Asian player in his 20s or 30s though, who seemed to have some idea of what was going on. I opened JJ from early and got called in 3 spots, standard. The Asian player was 1 of the callers and we saw a flop of 983. I bet out and only he called. Turn was a low blank and I checked, expecting him to bet. He checked back though and I thought perhaps he had a pair that he decided not to protect. The river was another blank and I overbet shoved, thinking it would look very bluffy. This is where things got weird. He tanked, finally flipping up QJ high and telling the table he couldn’t believe he was considering calling. He paid me off and I wondered how I could ever bluff any of these clowns.

Keeping The Streak Alive
I was in the middle of what would be a twenty-two session winning streak, but here I was stuck $1000 in a $300 cap 2/5. There was hope though in the form of a tilt prone player we’ll call Urchin. He had a giant stack as he begins sessions well and stays solid for a while. One of the software kids pointed out his stack to me in amazement. I replied with “It’s not who dances with the girl, but who goes home with her”. I chipped up a bit then opened AK and Urchin called. The flop came 356, I c-bet and called Urchin’s check raise. A Q hit the turn and he checked so the gig was up. I put in a sweet value bet on the turn and he called. He then moved all in on the 5 river for my last $500. I made the call and got shown A4. His quiet implosion that followed was amazing and he wound up re-buying well after I left. A switch flipped and he moved in every other hand like he does in this state.

Delusion and Poker
It was a weekend of James Bond like run-outs. First, on a Friday night, our own Persuadeo opened AA early and got called by a tight Asian lady and a whale we call Colorado. The board came AK2. Persuadeo had flopped top set and the Asian lady bottom set. Colorado, though stuck around to drill his wheel gutshot on the turn with a 3. All the money went in. Colorado was sitting next to me and happily showed me his hand. River 3! Colorado stormed off telling Persuadeo he was “6% to win.”

The next night included the legendary Demented Dentist whale who I had never seen leave a game. He opened to 20, I called with QJdd, and it went multiway to AxKdTd. The dentist, myself, and another player got all the $ in. Ad turn and it was lights out. The whale had ATo and the 3rd player had TT. After the hand, Persuadeo made some comment about me hitting the river (WTF?) and to this day, the whale calls me River Gargamel. He left the room without re-buying again on this night.

One year I arrived late Christmas night at my parents’ place to find out that my grandmother passed away that day. She wasn’t exactly in good health, but it was still shocking. After watching my NFL team get blown out of the stadium by halftime the next night, I left to go play poker. This would normally be awful timing to put in a session. Early on I lost a limped pot with top 2 to AA and was close to tilting my balls off. Around 5am, I called an open with J9hh and got it in with the preflop raiser who fast rolled QQ on QhTh5. Q turn and 8h river! I was so out of it that I didn’t realize the jackpot possibility. All I thought was at least I’m unstuck. Then I was worried I would miss out because I didn’t have a player’s card. That didn’t matter and 2 hours and some free champagne later, I was paid someone’s salary for the year.

2k Per Session
For the first 7 months of this year, I put in a string of 2k winning sessions. I’d like to be able to say it was due to my lack of tilt, increased check raising in the right spots, increased over-betting, and less c-betting. The reality is that while that helped, the main thing is that I turned over the best fucking hand because these clowns insist on showdown. Check-raising in these multi-way pots has been quite fun though. As soon as I check, my opponents are like puppies who don’t know object permanence and I’ve vanished from the scene.

Persuadeo: Well, your massive first half of the year, crushing the $5 capped game scene was more than running well. How has your game changed, if it all, from say, the beginning of 2016 to here in late 2017?

Probably the main adjustment would be bet sizing.  I’ve been blasting and while my player pool does not have much of a pain threshold, they are willing to play blown up pots with weaker ranges. I would add that I don’t usually miss value and often get the max

Persuadeo: You’re a reluctant forum participant, but in fact you took on a student this year and also have helped d’Artagnan smooth out his game. What are your thoughts on helping others and coaching?

Live poker at the $5 blind level is very beatable provided you don’t run like death.  I have plenty of experience beating this level and navigating all the multi-way pots.  With the right commitment, I can help others eliminate their mistakes and get where they want to be.

Persuadeo: One thing people don’t know about you is you read a lot of poker books. Any recent favorites? Any concepts that you find intriguing?

The books I read this year were Hunter Cichy’s new one as well as Matthew Janda’s new one.  I could be wrong, but I think Janda wrote that if you aren’t getting folds (even if you have value hands) then that alone is a form of running bad.  So I learned that I’m always running bad!

Contact Gargamel for low-stakes NLHE coaching with an emphasis on a pragmatic, true TAG style and for inspirational abuse at g@gargamel_poker or smashingsmurfsatsno@gmail.com.