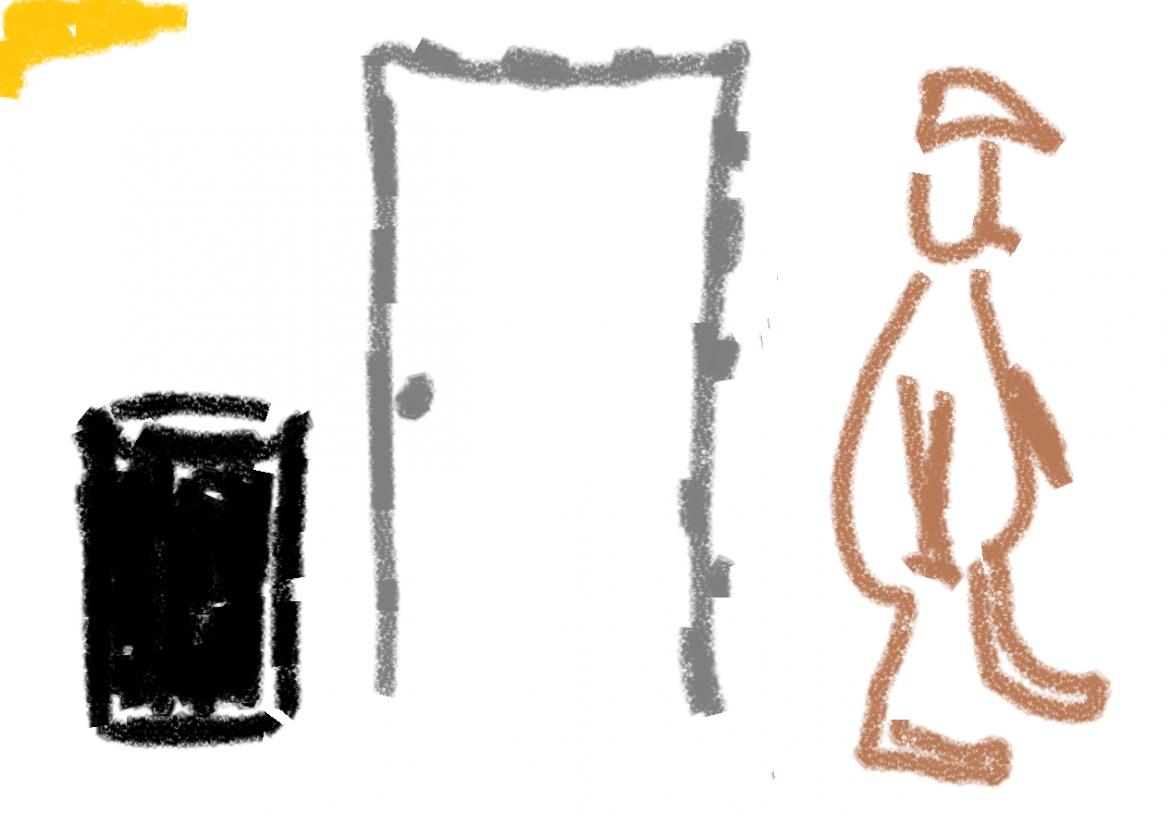 Directly outside the main entrance to the World Series of Poker at the Rio, the smokers are given a little circus tent to parade their disability under, shaded from the sun but not the passer byes. They shuffle and bend and stare. A few heavy duffel bags lay comatose and slack jawed in the brutal heat. There are no ashtrays, but the barrels that hold down the poles do have little crevices and nooks where the tobacco remains rest in peace. A lone garbage can loiters by the rough cream wall, next to grey metal door lacking graffiti. Somehow the concrete stays clean, too, and the wall is only pocked by a few black circles. No one has the energy to fuck anything up in one hundred degrees.

Sometimes it is nearly empty, our thoughtful patio of disease and relaxation. I can’t smoke anywhere around my apartment these days, with officiousness gaining a surprising upper hand on incompetence, but they can’t take the fumes out of poker, at least here, completely. It’s in all those photos, you know the ones, the glorious black and whites where Doyle and Puggy and Sailor and Jack and all those guys are gathered around some table of fat men and one hard as the open road woman, as drawn in by their friends as the gravity of the chips. Money satellites, poker players. The history of lighting up, allied with counting and ease and the post-adrenal refraction, is too close to poker’s own, and as anesthetized as tournaments are from the grit of real poker, we’re not completely politically correct yet.

Sometimes when I go out a tourney or sit and go is on break. The tent fills and the pool mills. Just like at the table, I am friendly. I trap myself, like checking top pair on the flop in a three bet pot, into getting felted by endless conversation. One guy won’t give up.

“The property was listed at $410,000. I’d been watching it for a long time. See it was right close to my property here… let me get you the picture, ok wait, how do I use this? Ok, there we go, yeah that’s my plot. You see that tree by that mound by river? That where his plot begins, you see? So I was watching the paper and the signs every day and that’s when it happened. Bam! Right there, $410,000 on the market for just a few days. I went over to the guy and he gave me an amazing price, just $360,000 but I had to get him the money in cash because he wanted to move right away. See, he was lawyer in L.A. and his son had family down there, so he wants to get out of town. He’s retired and can do whatever he wants. Great guy. I think I have a photo. See, look what he did with the…”

I start feeling for the lighter in my front pocket and put down my bag. I will never, ever be able to quit in this town.

There are better addictions, right inside, though. The cash tables are near the entrance, specifically the mixed games. One that I am partial to, five card pot limit high low, a hold’em variant that self-selects for gamblers. My first hand of poker in Vegas was at Planet Hollywood, where Skors and I went late into the night in a three handed 1/2/10 game, ending with villain handing his stack over to my host, but my first hand at the WSOP is here, in this game.

It’s always a bit nervy sitting down for the first time with players who you think are going to know what they are doing. Everyone’s here, and everyone knows how to play. Why do we do it to each other? Just the mere complete love of the game, of course, nevertheless, I want to start easy. I don’t even want to play the legendarily soft NLHE games. I don’t want to spew off in the morning and ruin the whole day on one misstep or hopeful move. Planet Hollywood is one thing, but I feel like playing in the Rio with my peers means my trip has officially started.

So I want an easy game where no one knows what they are doing. Why, hello Big O, how nice to see you!

I take my rack over to my assigned table and flip the table assignment over to the dealer, only to see a familiar figure in the one hole, directly to my right. It is James Sweeney,

the Red Chip coach and owner. His disguise as a Russian Orthodox monk on sabbatical for marathon training is completely successful. In fact, he has a pretty sweet gig lined up for himself, being a technical player in a slow, technical game and needing to run the Red Chip booth. He stacks chips and gets “come help me” texts when the book sales get too hot for the interns running the counter. No chant CDs available, though.

I don’t think I had to sit long before I made a call of one of James’ early position opens with a speculative hand with nut low and straight potential, a one flush non-premium. I had observed that three betting was docile so far and was ready to see my first flop.

It was a miracle that it did not go seven way, and with James and I and maybe one behind me, we saw a 972 flop. James led out, which got my attention because of the board. The deuce is a funny card, because if he has the hand he is supposed to have, based on his frequency and position, he should be unhappy fairly often. He shouldn’t have the middle straight cards, and with no flushes available, his opening range will miss this board fairly often, or more precisely, hit the deuce in a disappointing way. I had a gutter and nothing else, but range advantage works in all community card games, and I decided he had made a mistake.

I potted my piece of cheese, knowing that the kinds of hands that will call in my position should have secondary low draws that like the deuce and can be straightening two ways now. I in fact had no high and could be drawing near dead, but the positional dynamic and the board heavily favored me. After the remaining player surrendered, James went only briefly in the tank before folding what he claimed was a set. Without a real low, it’s not a great play to rip in against two way draws, and a technician can smartly lay this down.

You can only bluff good players, they say.

So there was my Red Chip subscription rebate, and a fine start to my session.

I took two more great spots before it was time to mill about and say hello to others. In the first I took a very aggressive back raise opportunity versus a player whose haughtiness gave me the idea he was making a predictable button raise. He instantly went to felt with me, and despite my having equity edge, a common chop emerged.

Then I got my profit moment. A, well, complete sea creature sat down who had to be reminded we were not playing PLO, the high only version that has experienced such phenomenal growth in the past few years, even at the lowest stakes. He was another cocky New Yorker, but this Vinny from 37th had not earned his arrogance. I ended up potting into him, basically for his stack, in a multiway bloated pot where I had flopped the nut low and second nut high draw.

For some reason, despite clearly being weak, he would not give me credit, and soon he explained why.

“I couldn’t put you on hearts. I’ve got the ace of the hearts, so you just can’t have it.” Vinny decides to hero me with what I think is pure air and some back doors on J83hh. Somehow I completely brick both ways and the dealer pushes him the pot, drawing about as thin as you can in a five card game, getting it in ahead but behind.

You can only bluff good players, they say.

Unfortunately, Vinny takes stock of the situation. He continues to explain himself and then trails off. I think he’s recognizing his fortunes aren’t going to hold in this game… perhaps from all the stares and interest he is picking up from the table. He’s like someone who has sneezed in a dark hallway on The Walking Dead. He racks up and leaves, deciding he’ll hold out for his PLO table in a more congenial waiting room environment.

At first I’m a little confused myself, and I can’t even figure out what he made the call with originally, although I recognize I ended up with pure air, but James kindly confirms that he did call with a pair of sixes.

My profit is gone but the morning is not ruined. I’ll be back for several more Big O sessions which will ensure I am playing with their money the rest of the trip. My plan to walk from McCarran and feel good is so far working out. James goes back to his yeoman’s work.

It’s good to meet some Red Chip folks and put faces to the names, or uh, at least I did at the time. I see Doug once again, and meet his girlfriend Miranda; apparently she is the hard working intern at the counter.

I head outside to hand with my other people, the smokers. Relaxed, I’m ready to get started. Soon, ChipXtractor will be here, and will open the door to the prize he has nabbed: a complementary week at the Club de Soleil, a vacation rental only minutes away. I’m extraordinarily grateful for this not inconsiderable hospitality.

Everything in Vegas is rake. There is not one thing I can think of that isn’t a gouge. At one point I pay six fifty for a glass of soda water. So if you can swing low cost digs – never mind free ones- you are already fifteen miles ahead of the enemy.

In the old days, I’d stay with the priests at the Dominican house. That was a substantial savings, and a pleasure, in a way, too. I miss those guys, dedicated old brothers and priests. Their great work is the HIV outreach center in Henderson. They do it right, providing complete service to a very needy and distraught segment of the population in a tough town. I toured the facility once and was not surprised at its efficiency and excellence. I left offerings from my poker winnings in thanks.

At the end of the day, I would meet up with Br. Frederick, an ancient one indeed. He and I would smoke under the canopy by their unused pool. He told me the story of how a particularly dedicated official of theirs insist they fill it with concrete. We laughed because it might as well be filled with concrete, for all the use those old men got out of it.

I don’t think I go back, unfortunately, having lost ties. It would be taking advantage of their hospitality, and there are some more personal reasons as well.

But I have this little canopy, this little tent at the WSOP, to share a smoke with some of the fellow spiritualists of my new religion.

However, there’s not much time to ponder such stuff. The trip has begun in earnest.

There is poker to be played.

Coming next: The Sun of de Soleil, the Happiness of Whole Foods, and the Bowels of the Nugget!

One thought on “Bright Days of Vegas, Part II”