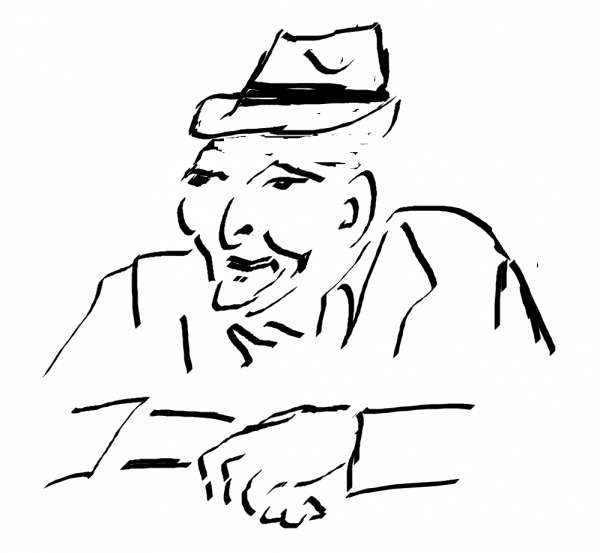 A guest post today from Fernando, a Las Vegas player and student of the game. Enjoy – Persuadeo.

The following is a tale of chicanery, risk management, and people who play poker in the desert.

Old Man Collin (OMC) has been been retired and living in fabulous Las Vegas for about ten years. Prior to retirement he spent over thirty years as an employee of a Fortune 500 company. During his time as a cog in corporate America he deftly worked his way up the ladder and managed to achieve distinction within the company, along with commensurately high pay. After he was satisfied and pleased that he supported his family, put his kids through school, ate his wife’s cooking for a very long time, he decided it was time to announce his retirement and spend his remaining years relaxing in the desert watching his favored sporting events, playing cards, and eating more of his wife’s cooking.

When OMC sits at a poker table he is happy he is there. He doesn’t take nearly enough risk relative to what he can afford but enjoys being out of the house and camaraderie while watching and discussing sports. He will occasionally bet on a baseball game or a horse he heard someone promote – talk of horses has become a replacement for what he formerly considered hot stock tips. By all appearances he is a happy person and content with the way he is living his life. But he is never the only person at a poker table; he also shares the game of painted rectangles with tourists and young, modern day versions of American Indians (Millennials).

The tourists at a poker table are typical of tourists anywhere in the world. They are there to spend money and, hopefully, get treated with respect*. They have varying choices when it comes to spending there disposable income and when in the Rome known as Vegas it makes a lot of sense to use a few hours of vacation time playing cards; maybe they want to observe OMC, as they suspect or hope to transform themselves into a future OMC.

And finally we come to the Y subset of Millennial (the pudgy, sugary-blooded youth born between 1991-2001). They are the current day Native Americans who traded and effectively gave up bows and arrows for guns and ammo. Wait. What?

Let’s go back a few hundred years to early America. That America had people leaving the comfort of middle class life on the established east coast to strike it rich mining for gold, somewhere out West. It also had the French, Spanish, and stuffy Brits vying for land and trading rights to produce money for their respective Treasury back home. Our America of yesteryear also had many Native Americans who had to deal with massive life stressors thanks to the foreigners invading their turf; I bet they would have loved a zero tolerance immigration policy. Anyway, the Brits, and other foreigners, who controlled land needed to find a solution superior to enslaving the Indians so they could send money back home, and one of the ideas they came up with was to arm them. However, they had to convince the
beige savages that exchanging bows and arrows for guns and ammo was good for them. How was it done? Well, the 20000 foot view of how it happened went something like this:

S.O.B. (Stuffy Brit): “Hello noble savage. I have a deal for you. How about you give me 15 deerskin and I give you a gun and enough ammo to kill 25 deer. I’ll even throw in a bit of that hooch you love to drink.”

The Indian ponders the offer and decides it is a good deal as he can kill deer much faster with a gun than a bow and arrow, and he only has to give the white man 15 deerskin for a weapon that will net him 10 deerskin which he can use to buy other goods, including ammo, and hooch.

It doesn’t take long for our Indian friend to become very skilled with his gun. He kills deer at will, as long as he has bullets. But, at first, he has no problem when it comes time to trade deerskin for ammo and other provisions. A few months pass.

Our Native friend continues to hunt and provide for his village but when he goes to buy more ammo he gets fewer and fewer bullets for his deerskin. He also notices he has to wait in a long line to buy bullets because other Indians have guns and they need bullets too. That’s not this only problem. The deer are now becoming scarce, and it is too late to plant crops; he neglected and missed the planting season because he was having too much fun drinking hooch and shooting deer. And he can’t go back to his handy bow and arrow as none of the other Indians will give up the “easy” kill of those suckers known as deer. Tough times for the Native. He has difficulty feeding his village and it will be very challenging going back to his former position of planting crops because the other more sensible Indians tended and maintained their land and stayed away from the hooch.

Does the tale of the Noble Savage remind you, just a little, of sugary-blooded Millennials who were told and sold a tale soft money and easy prey at the poker tables in the desert? The pudgy kids were also given free hooch. All they had to due was ask for it while playing poker or earn enough of those tier credits to gain access to a lounge where they could watch sports, laugh with their nerdy friends, and drink copious amounts of yummy hooch.

Well, I’ll tell you what. This is how a con works, some slickster gets you to think someone else is the sucker. In present day Las Vegas the abstract and nebulous poker industry has painted OMC and tourists at poker table as suckers. But guess what Millennial boy, YOU’VE BEEN CONNED!

*That is a fine and subtle point that most twenty-something year old aspiring poker professionals do not seem to understand; the game is there for the tourists, not the young, whiny, soft-bellied, self entitled bitch-boy.